Magic, using one’s mind to change the reality, being in touch with the Universal Mind, theoretical physics.

The reality on the level 5 of spirit manifestation is very different indeed from anything with what we are familiar so far and that is why it is extremely difficult for the ordinary human mind to imagine such a reality. The difficulty starts with the fact that on this level everything exists in four dimensions. This is the spiritual realm of angels, which is located immediately above the material world, and which from our earthly point of view is invisible, but on occasions can be “sensed”, “felt” or experienced in the form of strong premonitions. However, in order to understand the problems and tasks that are associated with the numbers in the fifth level of spirit manifestation, we should build a concept in our minds how the things look like as ifwe live directly in the angelic hierarchy and how the material world is experienced from there.

From this entirely new point of view, the things look totally different compared to the way in which we are accustomed to seeing them in our every day existence. In our three-dimensional material reality we are accustomed that the objects have a certain height, width and depth, we are adapted to think that there is a certain distance between two objects and that the further away the two objects are located from each other, the longer time it will take to get one to the other. In the four dimensional reality, the presence of the fourth dimension changes everything. The fourth dimension can be considered to be made of such spiritual element, which has the capacity to penetrate through all objects simultaneously regardless of distance and time. In fact, in the four dimensional reality all four dimensions are totally equal in strength. We can call this“isotope reality.”

The term isotope was coined in 1913 by Margaret Todd, a Scottish doctor, based on the research on Frederick Soddy, a chemist at Glasgow University. He noticed that several different chemical elements, which naturally should be at different places in the periodic table of elements, can under some circumstances occupy the same place simultaneously. Hence, the term “isotope” was proposed as suitable, which in Greek language means “at the same place.” Similarly, in our three dimensional reality two solid objects cannot be at the same place at the same time, but in a four-dimensional reality they could. So, we see that the perception of time and space are totally different on the fifth level of spirit manifestation.

From our earthly perspective, it is difficult to us to imagine exactly how the reality looks like from such a four-dimensional point of view, but the spiritual beings that form the angelic hierarchy (our guardian angels) live exactly in such a reality. Since in that reality all four dimensions are equal, the same angel can be at several different geographical locations at the same time. They do not have physical bodies, and therefore they are not restricted to be confined at just one specific location, but are free to exist at several places simultaneously if they feel like. This is the reason why the same guardian angel can be responsible and can take care of several people at once, who otherwise may live in totally different geographical areas. So, the same angel can be with each one of the people that it is responsible for, and protect them and guide them all at the same time simultaneously.

Since , the symbol of the number 16 can be represented with the four dimensional cube (cube with 16 apexes). Such a cube is the symbol of the four dimensional reality, just the same as the ordinary cube with 8 apexes is the symbol of the three-dimensional reality. As we mentioned previously, the problems that are dealt with on the fifth level of spirit manifestation are basically turned upside down (or represent the other side of the coin) in comparison with the problems, which we are accustomed to deal with in our three-dimensional reality. From our perspective, the reality is here and now and the spiritual world is experienced as above. However, from the perspective of the fifth level, all dimensions exist as isotope reality, i.e. in all possible directions simultaneously, and our material world is included in it. From our perspective, we can experience sometimes relatively high spiritual achievements and be very proud of them. However, from the point of view of the level five, these are experienced as bleak sparks of some low-grade spirituality. If nothing else, these sparks would indicate to the angels that there is a certain hope in the areas indicated, provided long and patient work is done with the material world in those areas.

The harmony, the self-sufficiency, and the spirituality of the numbers 12 and 15, look from the perspective of the fifth level of spirit manifestation as a vain, gray and two-dimensional way of representing things. This is the same how for us a beautiful garden with many coloured flowers and aromas will be represented by a black and white picture with a low resolution. The creativity and the zest for life of the number 5 and all its derivatives (10, 15 etc), looks from the fifth level of spirit manifestation just as a hopeful beginning of a long process of learning, perfection and improvement. In other words, the problems that appear in the fifth level, due to its relationship with the fourth are generally the problems of the spiritual teachers, who are the ones destined to lead people on their spiritual path. As we know, this is a very long and a very difficult process.

From our earth perspective, the only way to create some mental concept about the structure of the angelic realms (the fifth level) is only possible on the level of the number 8. This is so, because 16 = 8 + 8. However, the number 8 can only give us the dry, basic structure, the skeleton, the mathematical model, describing the life in number 16, but it is not in a position at all to give us more details. By using the energy of the number 8, we can get a glimpse about the set of rules that are ruling the karmic laws of the number 16. This means that using the number 8 (which represents a world that exists in our material reality and it is therefore easier to understand) we can formulate the basic karmic rules that apply to the number 16 (which represents a world that does not exist in our material reality, but on one level above, and therefore it is far more difficult to understand). However, in such a way we can obtain some information about the basic karmic laws for the number 16, but not its subtle, spiritual karmic laws. 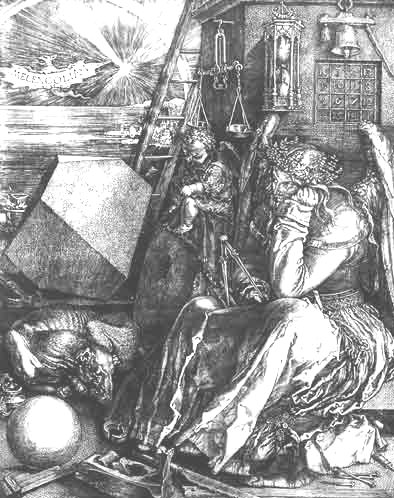 Similarly to the number 8, in respect to the sevenfold human structure the number 16 is related to the fourth (or middle) body, which is the mental body. However, on the level of number 16 a totally new vista is unlocked. An opportunity is opened here for the first time that a direct channel is established with the so called Universal Mind (the collective, large, Great Mind from where all our human minds originate). An establishment of such channel can give the opportunity to get data directly from this powerful, universal source of wisdom. One way to connect with certain aspects of the Universal mind is by using the magic square, such as the Dürer’s magic square.

Dürer (1471-1528) along with Rembrandt and Goya is considered one of the greatest creators of old master prints. He was born and died in Nuremberg, Germany. His prints, which had a very esoteric meaning, left a long lasting mark in the artistic centres of Europe. The Dürer’s magic square was first used in an engraving called Melancholia I. The engraving shows a disorganized jumble of scientific equipment lying unused, while an intellectual is absorbed in thought. There are many symbolic images in this engraving, which are beyond the scope of this article. The magic Dürer’s square appears at the top right-hand corner. The picture of this square is given below.

In this square the sum of all the numbers in any horizontal, vertical or diagonal line are always giving the same sum, namely the number 34.

Other squares like this also exist, and each one of them is capable to connect the person of the number 16 to different aspects of the Universal mind. And in general, the number 16 rules the magic and more specifically, this branch of magic which utilizes the mental capacity of a person to influence the spiritual world, by using the well researched and scientifically documented spiritual laws. And because the spiritual world changes the material according to its own shape, any changes that have been produced there after time will manifest as desired changes in the material world as well.

A person of the number 16 can be on low, medium, or high level of development. On a low level, this number can be revealed as an extremely fixed rationalism, sometimes bordering with dogmatism. The logic of such people is usually very strong, although often difficult or impossible to understand. At some extreme cases this may lead even to some psychotic behaviour, since the person concerned would have tried hard (consciously or subconsciously) to translate exactly the spiritual laws of the Universal mind into the material reality. Strictly speaking, this is totally unnecessary, not to say almost impossible, but the person in question may not be aware of this fact. On a medium level, this can produce people that have the ability to remember or process large amount of data. These are usually people, who are very good at games like checkmate or easily win difficult mathematics competitions. Another modification of medium level people of the number 16 are those who win TV shows where a vast amount of (usually unnecessary) data has to be remembered.

On a high level, persons of the number 16 have the ability to gain total control of their mental body. This means that from this position they will be in power to control the energies of their three lower bodies – the physical, the mental and the astral. This is very important, because a person who is in control of his emotions and feelings (the astral body), leads a healthy lifestyle (the ethereal body) and takes good care of his physical body can be said to represent almost the perfect combination of body-mind-spirit. The danger for such a person arises if he still does not allow the remaining three higher bodies (Causal, Buddhi and Higher Self) to influence his mental body. In such a case, this person can sink into too much rationalism and reasoning, forgetting about the real purpose of life.

Certain groups of people belong to the number 16, such as the professional mags, specifically the ones that are using calculations and some scientific approach in their work, or a large number of astrologers, who base their work solely on calculations and mental interpretations of the mathematical relationships between stars. Such astrologers operate on the level of the number 16 by using only their rational mind to explain what they see in the chart, but forgetting about the spiritual life and spiritual laws, that actually bring the planets into motion. On a very high level, a person belonging to the number 16 is recognised by obviously far too advanced mental capabilities, as if his mind is “out of this world” with a distinct ability to evaluate very quickly trends and people, which is bordering on “being a psychic”.

16 = 14 + 2 As a result of learning correctly how to deal with the polarization (2) between the practical and the high spiritual teacher (14), a connection to the Universal mind (16) is unlocked.

16 = 8 X 2 Amalgamating the precise spiritual instruments (8) that control two different levels (2) and by reconciliating the differences between them both, it is possible to attain the exact magical laws that govern the world (16).