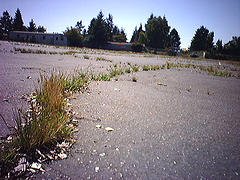 On the other hand, life (the number 5) is in a certain conflict with the rigid form (or the matter), represented by the number 4 and can begin a process of destroying it. This is necessary because the spirit wants to create new forms that are suitable for its development and in order to do so it has to destroy the old existing forms. This process can be represented with the stroke of grass, that breaks through the asphalt and in this way destroys it in order that more life comes into existence. We may think that the solid asphalt is stronger than the grass, but as we can see this is not true, because life (the number 5) is always stronger than any material substance (the number 4) and it is the life that submits the matter to its own needs and not the vice versa. Regardless of how rigid the form is, life always takes over. This can be seen in nature, where life-forms exist everywhere on our planet. Even in the darkest or coldest places we still can see life-forms which appear and gradually take over the matter. This can be represented with the formula: 5 = 4 + 1; life (the number 5) always conquers matter (the number 4), because it contains one extra element – the absolute energy, symbolized by the number 1. This is the first stage of the spirit development, which wove itself into the matter.

Another interpretation of the number 5 can be given as the fist creative manifestation of the spirit. In the number 4 the spirit was locked in the form, but in the number 5 it makes its first steps to submit the matter to its creative needs. In 5 we see for the first time how the dark matter, represented by the number 4 begins gradually to shine with light. This process is described with the first words in the Bible: God said: “Let there be light and there was light”.  However, many of the creative ideas inherent to the number 5 remain unaccomplished in the material life. This is because this number is still not so strong to realize them. As we will see later on, it is the number 6 which will complete this task. And in general, the odd numbers are more original and creative in nature, while the even numbers are those which tend to implement this originality and creativity into a solid, material form.

All even numbers are descendants of the number 2 and therefore they have a tendency to be more locked up into themselves, they want permanency and stability, which is associated with the attraction of the opposites. They also tend to be more associated with the matter. The reticence of the even numbers can be depicted with a horse-shoe magnet. It has two poles – north and south, which are equal in strength; none of them can win over the other and the whole structure of the magnet is stable. Thus, even numbers are locked up in a stable, fixed position, which is more oriented towards the earth. The odd numbers on the other hand always add 1 to the even numbers and thus they go out of the rigid forms, associated with the polarity of magnet (or the number 2). They always bring a new element, which is coming from the creative potential of the Absolute energy source (1 equals to the Absolute energy source) and in this way they are more oriented towards the spiritual world.

In astrology the number 5 is represented with the quintile, which is an aspect between two planets when they are 72º apart from each other (the circle of 360° divided by 5). It is a positive, albeit very weak aspect and for this reason many astrologers do not take it into consideration. When this aspect appears strongly in an astrological chart, especially when it is supported by other helpful influences, it makes us seek to understand the talents inherent in the nature. It is through our 5 senses that we experience the life directly, and since these are our natural gifts, the principle of the gift is that it should be used and so the talents and all of which we are capable must be brought into fruition. In other words if two planets are in a quintile aspect to each other in the chart they describe some particular gifts and talents that we are given. However, similarly to what we said earlier about the number 5, many of these gifts may remain not realized, since the task of realization and completion lies on the number 6. Hence, the recognition of the quintile as a positive, but weak aspect.

5 = 2 + 3 Life (the number 5) is harmonizing and softening (the number 3) the irreconcilable antagonism of the number 2. In other words life is putting in harmony the conflict between the opposites. This conflict as we know appeared almost in the very beginning of the Absolute energy manifestation (i.e. with the first appearance of the number 2).

5 = 3 + 2 The number 5 overcomes the reticence of the number 3 and adds to its harmony certain polarity (the number 2). This is energising the otherwise static number 3 and brings it to life (number 5).